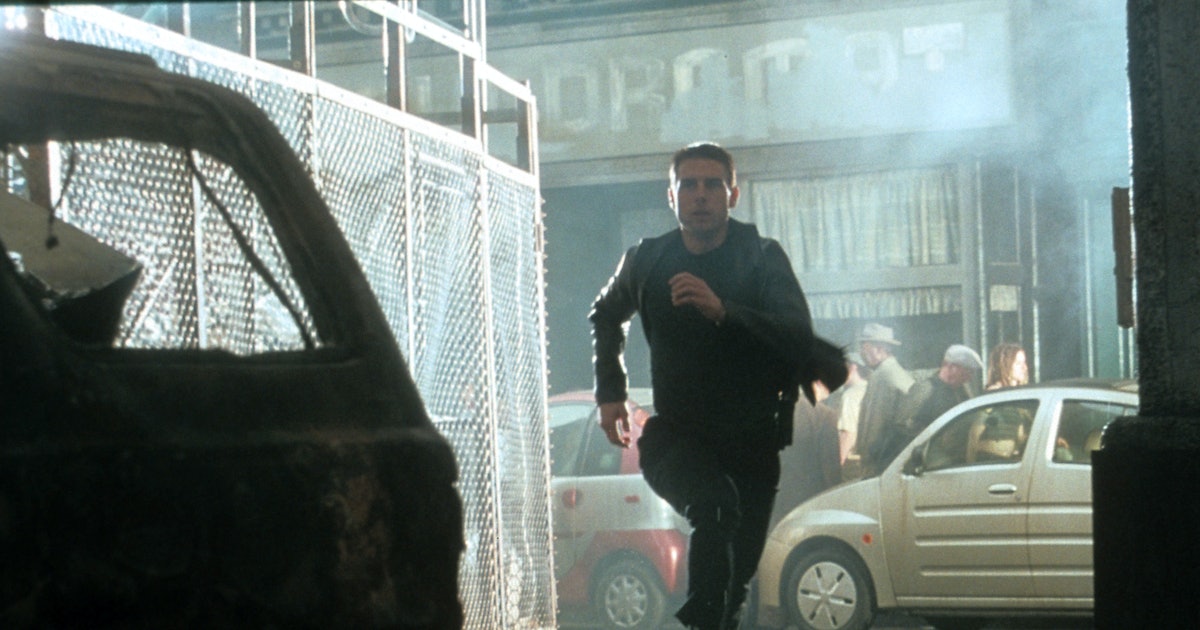 Tom Cruise running could describe an entire genre of movies. If real aliens were to select the most popular films of the past forty years, they might conclude that a mobile Tom Cruise was what moviegoers enjoyed more than anything. But the funny thing about the 2002 Steven Spielberg banger Minority Report is that it could easily work without Cruise. There are Tom Cruise movies and then, like Interview With the Vampire, there are films that Tom Cruise just happens to be in.

The way to think about Minority Report is to think of it as the most mainstream Philip K. Dick movie ever. It’s the pumpkin spice version of Blade Runner, but that’s a compliment. Here’s why you should check it out. No spoilers.

Like a lot of movies based on Philip K. Dick’s work, the premise of Minority Report is amazing and silly at the same time. In the future, murder has been eliminated because clairvoyant pseudo-telepaths called precogs can see through time and, based on images they project, can report details about a crime before it occurs. Tom Cruise plays John Anderton, a PreCrime detective who arrests people before they’ve actually done anything.

If you’ve ever watched or read one of these stories, you know how this goes. Like in Logan Run’s, Zardoz, or Fahrenheit 451, the enforcer of the unjust sci-fi law suddenly finds themselves on the wrong end of it. It’s a trope that shouldn’t work as often as it does in old-school sci-fi, but in Minority Report it works in spades.

Once the conflict becomes clear, Steven Spielberg directs the entire movie like one huge chase sequence. Which, yes, leads to Tom Cruise running. A lot. No one would put Minority Report in the top five Spielberg films but, in 2002, it felt like a specific kind of comeback. To put this in perspective, the quasi-Kubrick film that Spielberg “finished” — A.I. Artificial Intelligence — had only come out one year prior.

Other than the fact both movies are sci-fi films directed by Spielberg, it’s unfair to compare the two. And yet, with Minority Report, it felt like Spielberg was returning to crowd-pleasing action movies. Minority Report wasn’t a box office hit, but it wasn’t a bomb either. It was extremely well-reviewed and, even with today’s retroactive reviews, it retains a solid 90 on Rotten Tomatoes. It’s as though Spielberg said, “let’s do Blade Runner, only popular.”

That said, Minority Report isn’t a flawless film, and despite having more mainstream appeal than Blade Runner not all of its faux-futurism has aged well. Spielberg’s stab at the 2050s sometimes feels like Back to the Future II mashed up with an ad for the Gap. It’s a believable future, but not one you’d want to live in. You’ve seen this fake-future in sci-fi movies before, and you’ll see it again.

Some of the narrative flaws or generic sci-fi trappings can be blamed on the source material. “The Minority Report” isn’t one of Dick’s best stories, and nearly everything about the film improves on it. This isn’t to say it’s a faithful adaptation (good Dick movies almost never are), but it does take a generic sci-fi novella and turn into an easily digestible popcorn thriller.

This is probably the best argument for Minority Report: if you’re a fan of science fiction and interested in the history of the genre in cinema, the triumph of this movie is that it’s competent. Minority Report may begin to feel like a one-trick sci-fi pony, but in a world of trickless sci-fi ponies it’s kind of amazing.

How did Politics Become Only About Incantations?